Do you have a place for Sadness in your headquarters? (Inside Out) 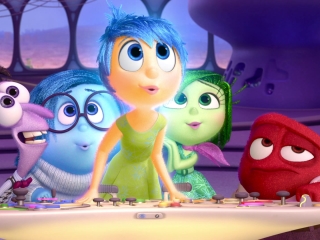 One can surely argue that the biggest hit of animation this summer goes to the Pixar movie Inside Out. As of August 6th, this “kid movie” has obtained over $330 million from the North American box office, an 8.6 on IMDb, and a 98% rating on Rotten Tomatoes. Having seen the movie myself, I think what makes it so amazing is the fact that it tells the story of such a complicated process (i.e. why we feel the way we feel) in such a simple and lovely way.

So what is this movie about? Long story short, the main characters are five basic emotions in an 11-year-old girl’s head, and together they “control” how the girl—Riley—react and respond to the environment around her. As a clinical psychology student, it is really interesting to watch this movie from a clinical perspective, and realize how therapeutic the story itself can be.

The first thing that made me thinking is the fact that the emotion Joy is the “boss” in headquarter—she was the first emotion that appeared in Riley’s head, and has been taking the lead ever since. On her team, there are also Sadness, Anger, Disgust, and Fear (all of which have found to be universal emotions of human beings, Surprise is another one). However, since Joy is in control, the sole object of all these emotions is to make their little girl happy, ALL THE TIME. If you think about it, this is quite common in our lives: parents want their children to be happy, we want our friends to be happy, everyone wants everyone else to be happy, all the time. With this being the case, where is the room for other emotions? The six universal emotions exist not just for show; they’re considered universal emotions because they all exist, for everyone.

In the movie, Riley’s family moved from Minnesota to San Francisco, which Riley is not happy about. During the first couple days after the move, nothing seems to be right: the moving truck got delayed, dad’s company is having issues, mom and dad has little arguments, and school is not as fun with no friends around. Amongst all this mess, Joy still tries to make Riley feel happy, only this time, Sadness appears to have an uncontrollable urge to take control. Personally, I truly resonate with this part of the movie, as I remembered so many times when I felt sad inside, but something told me that I have to be happy on the outside. Imagine you’re in Riley’s situation, is a forced smile really better than a whole-hearted cry?

When we feel sad, we need to recognize that emotion, acknowledge it, and allow it to take control. The movie gives a perfect example of how doing so can be helpful. Bing-Bong—a pink cotton-candy elephant with a cat tail—was Riley’s imaginary friend when she was three. When his rocket got dumped into the “lost memory abyss”, Bing-Bong was very sad and cried. Joy wanted to cheer him up by telling jokes, dancing, and even giggling with him, but none of those worked. In contrast, Sadness just sat down with Bing-Bong, acknowledged how he felt, and told him that she understood. Despite Joy’s fear that Sadness was going to make Bing-Bong feel worse, Bing-Bong actually stopped crying and moved on. As Sadness put it, “crying helps me slow down and obsess over the weight of life’s problems.”

In American culture, we’re taught that we need to be positive, be strong, and not get knocked down by anything. But is that realistic? If we feel something inside, but pretend to be something different on the outside, out behavior is not congruent with our emotions, and it can create psychological struggle and conflict. Therefore, although being happy is definitely a good thing, we need to leave room for other emotions too; and sadness is not equal to negativity, it’s an essential emotion that we all need. And for children, don’t just assume that all they can feel is joy, they are human beings too and they feel all kinds of emotions just as adults do.